Skip to content
I am currently on vacation and the products from my shop will be unavailable for the next few days.
Thank you for your patience and apologize for any inconvenience. The shop will re-open on 20th Aug 2022

OpenC64WarpSpeed cartridge which a is a clone of the WarpSpeed cartridge.
The original WarpSpeed is a Fast Loader cartridge released by Alien Technology Group.
The cartridge  outperforms JiffyDOS, and is the only cartridge of its kind to have native support for the Commodore 128. This cartridge is a near reproduction of the original Warp-Speed, based on the original schematics with a few extra tweaks.
Features
For more information see https://github.com/SukkoPera/OpenC64WarpSpeed
Usage:
Make sure that the Commodore is switched off before inserting/removing the cartridge. Old retro computers are not plug and play.
Failure to do this and you risk damaging your Commodore and the cartridge. 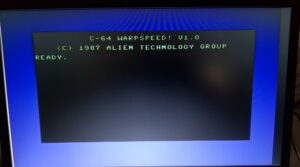